True bògòlanfini, known as “mudcloth,” is a 100% hand-woven and hand-dyed textile from Mali that derives its color from fermented mud via a dyeing technique that dates back to the 1100s. It’s only in recent years, though, that this gorgeous and painstakingly made textile known for its symbolic, culturally significant, repeating motifs has enjoyed widespread popularity thanks to decor bloggers and pinners everywhere, especially those who dig the whole minimalist aesthetic. Which is, like, pretty much everyone right now. The thing is, as beautiful as true mudcloth is, it can be cost-prohibitive for a lot of people. END_OF_DOCUMENT_TOKEN_TO_BE_REPLACED

IN THIS ARTICLE:
7 free social anxiety tests you’ll probably encounter online if
you Google; types of questions & results;
which sites are trying to sell you something

Google “free social anxiety tests,” and you’ll find these seven among the top search results — so I thought it might be helpful for some of you if I jotted down my impressions of each. It should go without saying that you should always take results from non-verified, for-personal-use tests with a good dose of healthy skepticism — especially if they’ve got an online therapy program to sell to you. Still, they can be a good place to start if you want a general idea as to the severity of your social anxiety, and possibly help you figure out your top anxiety triggers.

END_OF_DOCUMENT_TOKEN_TO_BE_REPLACED 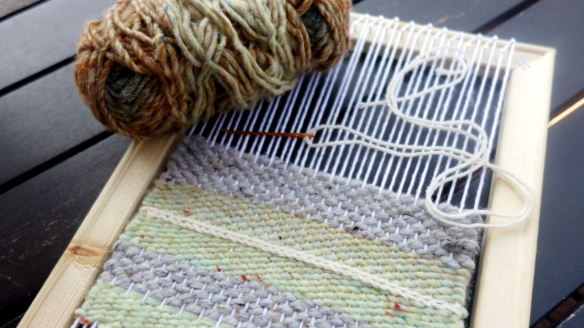 A DIY loom that’ll have you up and weaving in no time (Image: Maya Marin | ehow)

IN THIS ARTICLE:
why weaving is good for the anxious soul,
making your first weaving loom

As the anxious sort, I’m well aware that I should start meditating. Everyone tells me so — friends, acquaintances, wellness experts, my mother. And I want to — oh how I want to. It’s just so freaking HARD. Can’t even begin to count the number of times I jumped on (then promptly fell off) the meditation wagon. I’ve got the meditation audiobooks, I subscribe to meditation podcasts, I’ve got no shortage of guided meditations loaded on my iPhone. Yet, have I been able to keep it up for more than 3 days at a time? (*Head hung in shame*) END_OF_DOCUMENT_TOKEN_TO_BE_REPLACED

IN THIS ARTICLE:
what some researchers say about social media
and anxiety, how Facebook totally screws with my head,
I ask for your experiences and input

It’s clear to me that the more time I spend on social media, the more anxious I get. Yet I keep subjecting myself to it — every single day, several times a day.

END_OF_DOCUMENT_TOKEN_TO_BE_REPLACED

Hey taciturn types, make your serving ware do the talking for you. (Image: Maya Marin | ehow)

IN THIS ARTICLE:
Why shy types need a chalkboard serving tray
at parties, where to get materials, video tutorial

I’ve always been a fan of setting little ID place cards in front of appetizer items at get togethers. They’re great for me as a guest so I don’t have to barge into the middle of a heart-to-heart the host is having with a friend she hasn’t seen in forever to ask “so sorry to interrupt, but are these the asparagus or the broccoli quiches?” And though I END_OF_DOCUMENT_TOKEN_TO_BE_REPLACED

IN THIS ARTICLE:
dad’s words of wisdom, the rebirth of the blog,
how crafting helps my social anxiety and
maybe it can help yours

Saturday, August 26th, was my dad’s 73rd birthday. To honor the occasion, my younger sister Liesl and her husband Kenny threw a celebratory lunch at their apartment. Though I didn’t make it for the meal (I’ve got dietary restrictions up the wazoo), END_OF_DOCUMENT_TOKEN_TO_BE_REPLACED

IN THIS ARTICLE:
why I’ve decided to relaunch the blog,
accepting social anxiety as a fact of life

I’ve allowed this site to lay dormant for so long. Partly due to analysis paralysis. Mostly due to trusty ol’ self doubt. But you know what? I’m forging ahead — self-doubt notwithstanding. In fact, I’ve actually decided to make that a focus of the site, along with social anxiety and his sidekick social awkwardness. You can run, my pesky lifelong companions, but you can no longer hide.

END_OF_DOCUMENT_TOKEN_TO_BE_REPLACED

IN THIS ARTICLE:
An apology, I quit my job to work from home!,
relaunching the blog, watch my first video tutorial
– galaxy cushion covers

First, an apology. I’ve been away for so long, it’s shameful. And that’s because I’ve been working full time with a 3-hour-plus daily commute — and that’s just exhausting, both physically and emotionally. Especially for someone who needs plenty of alone-at-home recharge time, which has been scarce.

END_OF_DOCUMENT_TOKEN_TO_BE_REPLACED

Nebula art cushion covers I made for eHow

Hello? Is anyone still out there? Of course not — who am I kidding? After an absence as long as this, I’d be silly to think that my two readers would still be checking my little site for updates.

But I’m brushing away the cobwebs and revving up my DIY engines again because I have actually left my 9-to-5 office gig as a website content manager (complete with a lousy 3-hour roundtrip commute in L.A. traffic) for my dream job — working from home as a full-time video producer and writer for the lovely folks at eHow. Yes, I am actually DIY-ing for my bread and butter. And I, the incurable homebody, get to do it all from HOME SWEET HOME. (Check out my contributor page.) Pinch me. Seriously.

I’ll try to update my blog whenever a new video/article gets published to eHow, plus give you some additional helpful tips on the craft projects and recipes.

And there’s no better time than the present, so let’s start!

Check out one of the first videos I created for eHow: DIY galaxy-themed cushion covers. Click here for the full tutorial.

Originally, this tutorial was going to include sewing the cushion cover as well, but as I’m the queen of shortcuts, I figured why bother? Instead, I bought these super affordable and really great quality covers on Amazon. The video and tute came out great, but there are a couple of things I would have done differently — namely, the bleaching step. As you can see in the video, I was a little trigger happy, plus the nozzle should have been set to a more focused spray, so too many areas of the cushion lost its color (*womp womp wooomp*). I should have probably only squirted once, as my cover was only 12×12. Anyway, I filled in the over-bleached areas with purple paint, which I wouldn’t have had to do if I’d not given it that extra squirt. Ah well, they still turned out pretty well I think.

Also, instead of making a million tiny stars with the tip of a paintbrush, you can be bold and flick on some white paint using toothbrush bristles for a splatter effect, like this cute li’l boy is doing in this video. But, I didn’t “boldly go” that galactic route. (See what I did there with that infamous split-infinitive Star Trek reference?)

And here’s the image I used as my inspiration. It’s a galaxy cluster officially named Abel 2744, a.k.a. Pandora’s Cluster. Gorgeous, right?

The bleaching technique is the most widely used, but if you don’t want to mess around with nasty chlorine, there are other tutorials that give a bleach-free option. I for one liked the randomness of the bleach spots, which will guide the rest of your design. Kind of like the chaotic yet beautiful nature of the universe. Not sure if that analogy works, but I like the sound of it.

IN THIS ARTICLE:
that a-ha moment of upcycling inspiration,
achieving boho fabulousness in 5 minutes

Whenever I’m out shopping, I find it extremely difficult to resist the allure of a scarf with a particularly beautiful colorway and print. The result? A scarf drawer crammed to capacity, with many a silken or sheer square buried and forgotten beneath the ever-growing collection. I always knew that these lovely, neglected pieces of fabric presented a prime DIY upcycling opportunity — I simply needed to figure out what that opportunity was. Now I know! After END_OF_DOCUMENT_TOKEN_TO_BE_REPLACED

THE INCURABLE HOMEBODY
Create a free website or blog at WordPress.com.